The Suzhou Museum Contemporary Art Gallery became the stage for Peng Wei ethereal timeless ink artwork around the architectural surroundings, playing in perfect harmony. Her latest solo exhibition is named ” I Thought of You”.
The show features over 50 works, created by the artist during the last five years.
Peng Wei’s career started in year 2000 with works entitled “Stone”. It followed with other series named “Shoe’, (above) “Robe”, Painter installation “, “Letters from a distance”, and Shan-Yuan.

Known for her outstanding ink works, she weaves traditional China painting and personal vision, mixing the boundaries between tradition and contemporary, East and West, past and present.

Well known Chinese artist Ai Weiwei is visiting Qatar this week to experience the country’s flourishing arts and culture scene. Qatar Museum is committed to bring established creative artists to the country to inspire generations of indigenous talent. He will visits most museums and art institutions and he will explore many of then country’s notable and recognisable public art projects, including the striking sculpture East-West / West -East by Richard Serra, located in Zekreet.

He will also as part of the visit be giving a public talk, open to all to attend at the Museum of Islamic Art, alongside Swiss businessman, diplomat and art collector Uli Sigg. Sounds like he will soon add something to the public art scene in Qatar and we can only look forward to what that will be. I ma sure he will be an inspiration to many young and aspiring artists during his stay.

Above is the sunflower seed made by Lego pieces as donated last year under some controversy.

Posted on April 5, 2017 by rolflethenstrom

Hong Kong recently had their Art week with Art Basel HK and Art Central attracting over 60,000 visitors. It was a huge success and the visible trend of more modern art than contemporary art. Perhaps a direction from the organisers. The mix is definitely good and educational for Asia as the art market is getting more and more global. Hopefully we will then also see more Asian art in Art Basel, Basel and Art Basel Miami.

Last weekend Sotheby’s had their spring auctions in HK and an Andy Warhol painting of Mao Zedong from 1973 was sold for HK$ 98.5 million (US$ 12.6 Million), setting a new record price for any western work of contemporary art sold in Asia. Well, it has to be a Asian icon of course so a daring move by Sotheby’s for such blue chip artwork. The previous owner bought it from Sotheby’s in London in 2014 for almost the same amount, meaning the value of the work failed to keep up with inflation. An Asian private collector is now the happy owner of this great artwork.

Finally a note of sad news that James Rosenquist has passed away. A truly iconic painter representing the pop art from USA at its best. Above artwork was exhibited at Art Basel HK 2 weeks ago as a statement that pop art will always be in demand forever.

Liu Di (85) has a solo exhibition at Pekin Fine arts in Beijing titled “Break with Conversation” and will continue until April 29, 2017.
Di’s latest works are on display and focus on the themes long pursued in his photo works by critiquing the conflicting relationship between nature and human society. Using subtle humor and science-fiction (like the enlarged animals a few years ago), the artist pay homage to traditional landscape photography and nature photography. His aim is to break the stereotypes and bring awareness.

Posted on March 9, 2017 by rolflethenstrom

Launched on november 10, 2016 and running at Shanghai Minzheng Art Museum, Gu Wenda “Journey to the West” features some of the artists major works, almost like a retrospective exhibition, with his ink art from the 1980’s to present, as well as installation, documentary and performance.

The joyful coloured lanterns that cover the whole facade of the Museum are a new work by Gu Wenda. The show took 5 months in preparation.
Gu Wenda graduated from China National Academy of Art in Hangzhou and worked there as a teacher for six years before emigrating to the U.S. in 1987. Now he has studios in both countries. Gu has extended the vocabulary of traditional Chinese Calligraphy, embracing new influences as China opens to the West in early 1980s.

The show emphasise on his ink art, exhibited along the long walls escalating up on the museums outer walls.
His achievements show he has come a long way since he moved to the US as he still adopts just such a simple approach from Chinese roots and limited influence from the West.

Posted on January 17, 2017 by rolflethenstrom 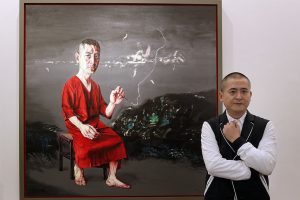 The Global Chinese Art Auction Market report, compiled by Artnet and the China Association of Auctioneers asserts that overseas sales of of Chinese art has more than quadrupled since 2009. At the heart of the surging interest in Chinese contemporary art is, naturally, the artists themselves. China’s artistic styles are so rich and varied as the culture and generation from they emerge.
Based on the auction total sales the top ten selling living Chinese artists are the following:
1. Zeng Fanzhi
2. Cui Ruzhuo
3. Zhang Xiaogang
4. Fang Zeng
5. Zhou Chunya
6. He Jiaying
7. Huang Yongyu
8. Yue Minjun
9. Liu Wei
10. Liu Xiaodong 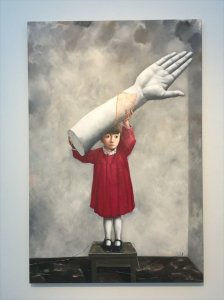 Their popularity will remain for a while as their art is so recognised by the international collectors. Never wrong to invest with the blue chips of Chinese artists.

Posted on January 6, 2017 by rolflethenstrom 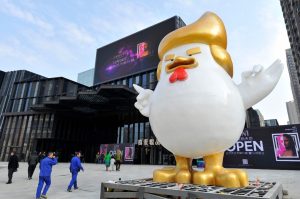 The first funny art creation of 2017 would seem to be China’s 23-foot-tall Donald Trump-like rooster sculpture, welcoming the year of the rooster on January 28th. It is designed by Seattle based illustrator and animator Casey Latiolais in honour of the Chinese zodiac.
The fiberglass statue, located outside a shopping mall in Taiyuan in Shanxi province, features a Trumpian scowl with bushy eyebrows and a golden helmet of hair. It was created on consignment for a Chinese Real Estate developer but the Latiolais added the Tromp-like features are of his own accord.
According to the Chinese social media news outlet, the statue’s egg-shaped body and golden hair symbolise wealth and prosperity for 2017. The stud has been very popular in China, with several copies of the artwork for sale on Taobao, the Chinese eBay, even an inflatable version. 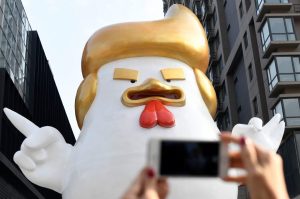 On this funny note I wish every reader a Happy New Year and a Happy Chinese New Year.

Posted on December 29, 2016 by rolflethenstrom 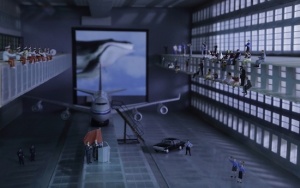 Uli Sigg created in 1997, the Chinese contemporary Art Award (CCAA) for the first prize to be set up in China for contemporary Chinese art. This year the biannual award recognised three artists with international careers.
The best Artist Award went to Cao Fei (1978), belonging to the xin xin ren lei 1990’s generation attesting to the globalisation and extension of contemporary China.
The Contribution Award was attributed to Xu Bing (1955) who has worked since the 1980’s on symbols of Chinese society. The artist spent 18 years in USA before returning to China 2013, where he then developed his “History without Words” project.
The Best Young Artist Award was won by He Xiangyu (1986). Criticising the effects of globalisation, he presented the Coco cola project, during which 127 tonnes of soda were transformed into solid material, as well as the Tank Project, requiring several thousand hours of work and tons of leather. 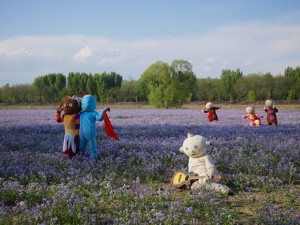 Cao Fei is one of the most innovative Chinese young artist to have emerged on the international scene with her installations, video and photographs. Her work reflect on the rapid and chaotic changes that are occurring in Chinese society today. She has already been represented in several international biennales in Shanghai, Moscow, Taipei, Istanbul and Sydney.

Posted on November 23, 2016 by rolflethenstrom 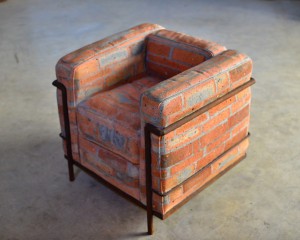 Leo Gallery in Hong Kong is exhibiting the first solo show by Chinese sculptor Dai Yun. His brick sculptures have gained him recognition and it now collected by several museums and collectors. He has also been featured in established magazines such as Chinese Avant-Garde Art 1979-2004.
He uses grey or red bricks and concrete to create contemporary sculptures that have become iconic. It could either be classical figures or daily objects, his usage of bricks bring about a liveliness to his art and that adds to its rich.
The gallery is located at SOHO 189 Art Lane on 189 Queens Road, HK.

Posted on November 22, 2016 by rolflethenstrom 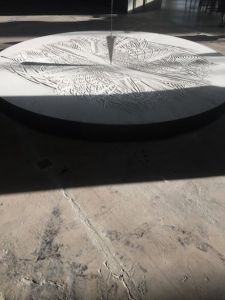 The title for the Shanghai Biennale 2016 is “Why not ask again” and is on view at the Power station of Art in Shanghai until March, 2017.
The Museum’s huge second-floor atrium i taken over by Nou Sen+MSG moonscape installation The Great Chain of Being – planet trilogy, which consists of a an experimental theatre within a crashed spaceship, video sound and bees. 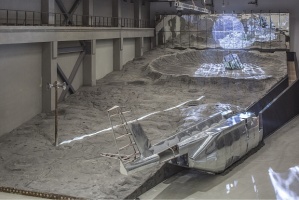 The curators Raqa Media Collective welded the title with works by 92 artists and collectives from 40 countries into a intelligent, provocative show that blends many layers revealed by questioning of facts and realities. The group brings visionary speculation to the table, compelling the views to do the same.
The environment for contemporary art in improving and the Shanghai Biennale is a platform for all art to interact. The venue is exciting and enables space for the viewers.